How Friction, Temperature, and Lubrication are Related

When selecting bearings for your next project, there are three key factors to consider, which are also a function of the load being carried and the limiting or speed required. The friction, temperature, and lubrication involved in a system and its environment directly impact bearings, so it’s critical to select a bearing that has the proper tolerances for your application.

How Friction, Temperature, and Lubrication are Important to Overall Bearing Performance

Friction results in wear on a broad range of components, and bearings are no exception. Friction can directly cause thousands of dollars in damage to systems and machinery. Provided bearings are working under normal operating conditions, rolling bearings offer much lower friction coefficients than their slide counterparts—especially starting friction.

In a majority of cases, bearing temperature follows this path:

The amount of time that it takes a system to reach a stable state varies based on several factors, such as:

In events where temperatures continue rising for inordinate amounts of time, it must be assumed that a malfunction is occurring. Non-constant temperatures are red flags and should be assessed immediately.

Rolling bearings cannot operate reliably without adequate lubricant, which helps reduce friction and cut down on wear and tear. In some cases, lubricant aids the cooling a system as well.

When friction is converted into heat, that heat must be dissipated to avoid the risk of damage to the bearing. Selecting the proper lubricating oil can help dissipate a portion of the heat. Recirculating oil lubrication with additional cooling features implemented can be an effective cooling method. While grease does not offer any benefit in heat dissipation it is still the most popular form of lubrication. As a result the grease selected should have operating parameters appropriate to the application, NLGI density, temperature rating and service life.

How These Three Variables Work Together in Bearing Products 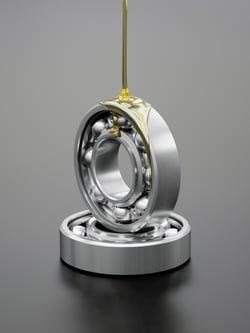 Friction and grease resistance oftentimes work in tandem to increase bearing temperatures. When operations initially begin, it's typical to observe a rapid rise in temperature in the internal bearing. Eventually, heat will begin to gradually dissipate to the shaft and housing of the bearing and cooling effects from the lubricant will also begin to aid in stabilizing temperatures. There should be an awareness that too much grease can cause ‘churning’ and a resultant heat increase. The common rule is that bearings should have a 20%-30% fill of grease. Typically this would be filling every space between balls on one side of the bearing with grease.

When high temperatures become a constant issue, they can lead to reduced bearing clearance and a deterioration of the running accuracy and lubricant. These factors translate to a reduction in the lifespan of a bearing, which is why considering the effect of temperature increases is critical during the bearing selection process. Users may consider higher end ‘technical’ greases that can provide higher temperature ratings and a longer service life

If you're interested in learning more about which bearing type is best for your organization, download our eBook, Bearings 101, today.

Let our worldwide sourcing give you the best price and delivery options today!