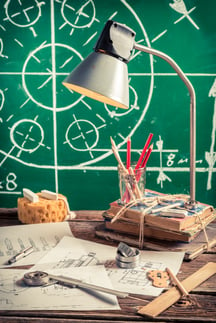 If a load is too big for the bearing’s carrying capacity then accelerated fatigue or even plastic deformation can occur, resulting in a shortened service life. There are two kinds of stresses to consider when choosing a bearing: static and dynamic.

Static stress doesn’t necessarily mean that the load itself is static. “Static” actually refers to the state of the bearing, not the load. Static stressing occurs when a load, either constant or variable, is applied to a bearing that is stationary or moving very slowly. If the load is too big it can cause plastic deformation of the rolling surfaces and even flatten the rolling elements, which can prematurely and catastrophically end the life of the bearing.

Dynamic stress also refers to the motion of the bearing, not the load. Dynamic stress occurs when a load, constant or variable, is applied to a rotating bearing. If the load is too big for the carrying capacity of the bearing, it will cause fatigue in the bearing prematurely and cause cracks and flakes in weak points. This will result in failure due to material fatigue, i.e. the death of your bearing.

Although there is some supporting evidence for each of these theories, the alternating shear stress theory is what is commonly used for calculating the fatigue life of rolling bearings. The fatigue life, or rating life, is defined as the number of revolutions or number of hours, at a constant speed, reached or exceeded by 90% of a group of dimensionally identical bearings before the first signs of material fatigue appear. Typically the rating life of a group of bearings decreases as the load increases.

The expert technical team at Emerson Bearing is available to help make sure that your bearings don’t get “stressed out”. We can help you with all your bearing needs. Contact us today or visit our Catalog and Technical Toolbox webpages for more information on how we can serve you.

“Of all the suppliers I have dealt with over the years you rank in the in the very top in terms of quality, technical know-how and support. Your company is the benchmark for the industry! “